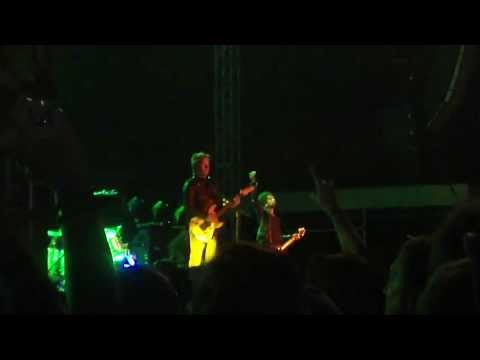 Carolina Rebellion, for all the disappointment of three bands not performing, was a pretty cool place to be this weekend.  The wind blew hard and the rain eventually came down hard, but for those who stuck it out it was pure rock bliss.  For most a rock concert has little in common with church, but I tend to think that there is clearly something more than just empty rhythmic and harmonic entertainment going on--dare I say something something spiritual going on.  You have to pay attention when thousands of folks are singing the same song at the top of their voices, pumping their fists in the air, slapping fives, bumping chests with total strangers, and other outward and visible signs of the inward and powerful tug to release and express.  There are few things like being in the middle of a sea of people who all identify with a song on some level deep enough that they invested the time to learn every single word to a song and have listened to it enough that they learned every vocal inflection and stray utterance.  It is overwhelming.

Saturday night at the Rebellion when Alice in Chains took the stage, the crowd had thinned somewhat because of the wind and rain and whatever motivates people to get tired at a rock festival.  But the people who were there were, well, off the chain.  I had been to concerts where the crowd was wildly into what was happening on stage, but this different somehow because it was rainy and cold and the end of the day, because AIC had a different lead singer (William DuVall) from the one (Layne Staley) whose voice carried the majority of their "hits" (isn't that a weird phrase for hard rock?), and because, for all of that, we couldn't help but get our own voices in tune and sing till the veins bulged in our necks and our throats hurt.  THAT was remarkable for the release and the energy I got from just letting my voice and self go.  When Jerry Cantrell hit those first few chords of "Rooster" the crowd went nuts.  The folks right in front of me started jumping up and down or holding their beers in the air or putting up the "horns".  We all let out a yell; we all started to sing when it was time; we all wailed when "the bullets scream to me from nowhere" and when "they come to snuff the rooster. You know he ain't gonna die."  It hurt my throat and it felt so crazy-good even though I didn't know a soul around me and even though I was exhausted.

Check out this bootleg from Youtube of "Rooster" from the other night.  It's not a great recording of the music for music's sake, but it's an outstanding recording of why music that means something--and AIC sings about stuff that matters--takes on a whole new meaning when 10,000 people sing it at the top of their out of tune voices.  This congregation is not washed in a sense of holiness, but a sense of real and authentic expression that comes from somewhere deep inside.  I can say this without even slightest flinch: thank God for putting that desire, that need to express ourselves inside us; thank God for that spark of the divine that burns brightest when we say or sing something that is so true it imprints on our minds and our hearts.

Even for those of you whose musical tastes are of a more, um, gentle disposition, every now and then sing loud like a maniac; just let go--it's good for the soul.