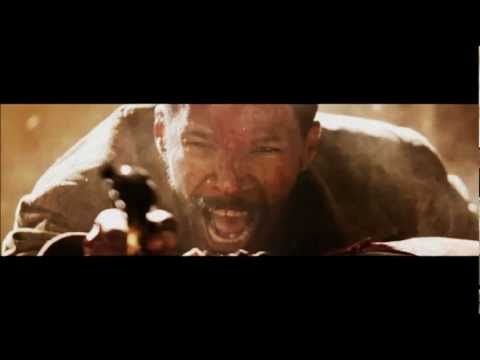 I went to see "Django Unchained" on Christmas night and left speechless (which is a big deal). Folks can debate the use of a certain word that has historical as well as racist context, and folks can debate all kinds of political implications of the movie, but by the end of the movie I was sort of wiped out; I had experienced something outside of myself that got into me somewhere inside.  As always, music played a key role in what I felt.  One scene (no spoiler, here) busted out old school Richie Havens at a time when I just didn't see it coming.  I looked around the theater to see if other folks had the same reaction I did--some were wiping tears (weird in a Tarantino film, for sure), some had to remember to close their mouths.  In another scene, the song from this video played and it made me stop thinking about the characteristic Tarantino visuals and see that characteristic pointing to something much deeper than simply spectacle.  For everything else that the movie is about, it surely is about freedom to pursue the person, place, thing, or idea that matters the most.

I can't pretend to understand the feeling of being literally enslaved, segregated, lynched, or regarded as less than human. Those periods of American history are clearly sources of shame for our society.  I have to confess that much of what I felt in that theater watching the movie was a vague sense of shame or guilt.  Yet, when the movie was over, the entire theater applauded the movie. We were probably half white and half black in that room, but by the end we all ended up at the same place because we were all rooting for Django.  I don't pretend to have a theory or philosophy about it, but something happened to us in that room on Christmas night that we all identified with in different ways-- me feeling guilty and the person behind me feeling the pain, but both of us feeling angry at slavery, both of us rooting for Django in his quest.  Something important happened because we shared an experience (a well-made movie) from our own experiences and reacted the same in the end.  Maybe we are all, ultimately, looking for freedom--true freedom that does not take freedom away from others, but can be enabled by friendship and shred experience.  The thing about true freedom, though, is that it may cost everything we have to gain it.  But that's the way of real friendship--it's worth everything!

What do you think?

Felt like the weight of the world was on my shoulders
Pressure to break or retreat at every turn
Facing the fear that the truth, I discovered
No telling how, all these will work out
But I’ve come to far to go back now.

I know all too well it don’t come easy
the chains of the world they seem to move in tight
I try to walk around if I’m stumbling so familiar (??)
tryin to get up but the doubt is so strong
there’s gotta be a win in my bones

Oh not giving up has always been hard, so hard
but if I do things this way, I won’t get far.

Mhm, life hasn’t been very kind to me lately,
but I suppose it’s a push for moving on
in time the sun’s gonna shine on me nicely
something tells me good things are coming
and I ain’t gonna not believe