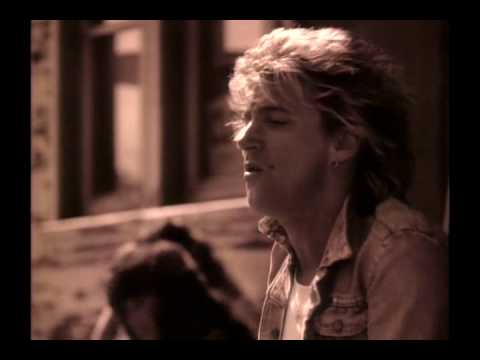 The first time I heard the song, I was house sitting for my next door neighbors, who had the full cable t.v. package that included MTV (back when they were actually Music TV). I was in the throes of algebra homework, with MTV on in front of me, when I heard a commercial end. So, I looked up to see what video would come next.

When the sepia tone of the video came up, I kept watching because it was different.  Rod Stewart showed up, then Jeff Beck, the legendary guitar player, showed up riding a freight train to meet up with Stewart (and check out those 80s haircuts!). The song, about how God will make things right in the world, resonated with both my religious and pop culture sensibilities. The blues and gospel influences in the song made it feel somehow more important than other songs.  There it was: rock music brought together social and religious perspectives and challenged them both.

At the time I didn’t know that Curtis Mayfield had written the song (or anything about Curtis Mayfield except Superfly).  Mayfield wrote it on August 29, 1963, the day after the March on Washington for Jobs and Freedom—the occasion for Martin Luther King’s “I Have a Dream” speech.  Dr. King’s influence accounts for the heavy spiritual content, and the vision of “justice rolling down like an ever-flowing stream is responsible for the anticipation of something new and bold starting to happen. Mayfield said, "That was taken from my church or from the upbringing of messages from the church. Like there's no hiding place and get on board, and images of that sort." Since Mayfield and the Impressions first released the song in 1965, it’s shown up in hundreds of places (Bob Dylan has three recorded versions of it!) by the broadest possible array of artists, including Aretha, U2, Alicia Keys, The Doors, and Dokken (yes, Dokken).  Bob Marley included part of the song in one of his signature songs, “One Love.”  The lyrics show up in one of the songs on Springsteen’s new album, “Wrecking Ball.”  Still, other than Mayfield, no one is more associated with the song than Jeff Beck, who has played some of the most powerful guitar interpretations of the song (including one of my personal favorites with Joss Stone).

Beck’s guitar solo in the music, and the sight of the Fender Telecaster in the video, were among the first things to make me think I wanted to learn to play guitar. “People Get Ready” was among the first songs for me that connected music, social change, and spirituality.