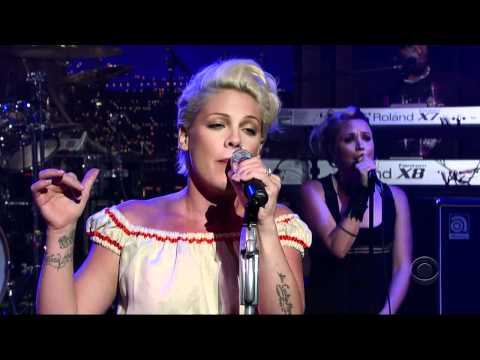 I took my sister-in-law to see Pink in Atlanta last week. I've got to admit to having always liked and admired Pink because she writes really intense lyrics, isn't afraid of herself, doesn't seem to be afraid of much of anything, and she can perform the hell out of her own and others' songs. She is a spectacle in and of herself when she's on stage, but even more so when she sings upside down or spinning hanging 40 feet in the air over the arena. Her acrobatics are impressive for sure, but the truth is that we could go to the circus to watch people dangle from the rafters.  She does it with flare and, yes, with that amazing voice of hers that expresses far more than just words.  Her studio recordings are obviously produced (sometimes to the point of damaging the songs), but in concert it's rock without the studio cotton candy. The guitar and bass are loud and distorted, the drums are wildly perfect, and her voice ... her voice.  And while studio overproduction can obscure the depth, there can be no avoiding her authenticity, particularly in concert.

Why do we need categories for music?  Probably no more reason than that it's a kind of credibility for how alternative we are or how edgy we are or how cool we are or how we don't care.  Of course, aligning ourselves with categories that we think make us look cool can be just as pretentious as any kind of status symbol. So,  is Pink pop or rock or pop-rock or fluff or what?  Why can't she be any of the above or whatever she wants to be?  When I first heard her sing "Highway to Hell" was when it was first obvious to me that she is far smarter than the catgories or the industry that makes bazillions of dollars polishing and honing their talents into caricaturesof themselves.  Sure she uses pop hooks, but it feel weird to hear pop hooks that say intense, "inappropriate," or outlandish things.  She is the real deal and knows how to get her story out there.  How many singers (male or female) can sing about punching people and you are pretty sure they've done it before?

Seeing her in concert the other night made me be more than an admirer of hers. It made me want to pay attention to the spectacle she produces, how she expresses.  She seems so fearless, yet from her songs it's pretty obvious that she is as vulnerable as anyone. Maybe the acrobatics, the spectacles that make her different from other performers, are her way of getting us to pay attention to how dangerous it is to put your guts and heart out there on display, how scary stuff really is. It even seemed that she was making a statement, a really vivid statement, that no matter how scary life can get you sometimes have to do scary things just to know that you have to be more than afraid--just because you are vulnerable doesn't mean you can't do bold things; just because you do bold things doesn't mean you don't get afraid.  She can be flying around above the arena one minute, then stand in front of a drum kit on stage the next.  In fact, when she did that was when I bought into her persona (stage or real or both? how do you ever know the difference?): the kit appeared in front of her and she boldly proclaimed, spontaneously and maybe accidentally even, "I just like to hit shit."  She had me--I bought it, I'm not at all ashamed to say.  Who knew?